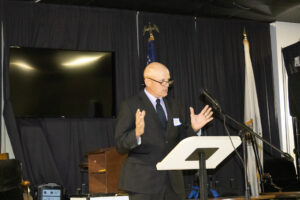 Bruce Baker has been many things in his life. As a high school student he worked 4 p.m. - 12:30 a.m. five nights a week at the Westinghouse Meter Division, graduated on time, then completed an eighteen-month apprenticeship to become a machinist while starting his own landscaping business with nothing more than a Chevy Luv, a lawnmower, a weed-eater and a blower. A hard worker who loved his family, that very well could have been the end of the story for Bruce. Twelve years later, outsourcing came for his job just as it has come for so many jobs across rural America, and Bruce found himself starting over in his career, now as a single dad to three children.

But he knew what was next for him.

Having long harbored an insatiable urge to serve, Bruce found his calling in Law Enforcement, graduating BLET in 1992 and going to work first at Youngsville PD, then with the Franklin County Sheriff’s office. From Bike Patrol, where he made the town of Youngsville’s first bicycle based DWI arrest, to Patrol Sergeant to Sergeant in charge of Franklin County’s first ever School Resource Officer program, Bruce has seen every in and out of law enforcement. He knows what it takes to run a successful administration. The ingredients are simple, though often hard to come by. It’s a love for people. A love for the law and Constitution. A head for numbers. And above all else, it’s a fundamental desire to serve one’s neighbors, friends, and community. It’s that unique mash-up of skills honed over thirty plus years of working until his knuckles bled. Of running a business while finishing school, growing a business and starting a family while changing careers, and maintaining that business and growing that family all while serving his community as a Franklin County Sheriff’s Deputy. That’s why he won Deputy of the Year in 2006, for answering more calls than any other civil deputy on the road. And that’s why, only one year after his April 2020 retirement, the call to serve still rings as bright and sweet as the day he first took the oath;

It’s time to bring a new life to the Franklin County Sheriff’s Office. The solution is simple. The execution—not so much. Focus on three key principles:

That’s the recipe. That’s what Franklin County is missing. That is what Bruce Baker brings to the table.